Through his firm, Sean was able to get us free tickets to the Washington Redskins game on Sunday against the Chicago Bears.  It was my first professional football game and it was so much fun! 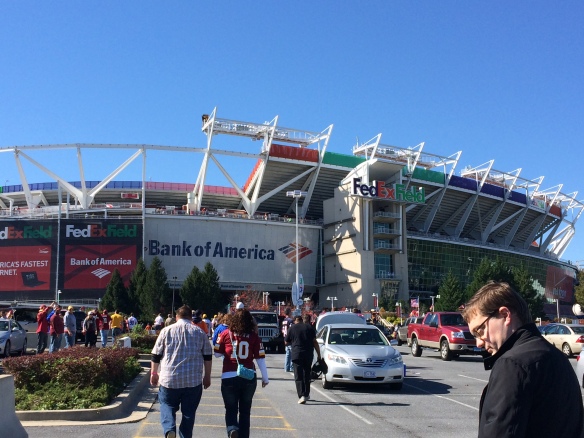 Did you know the Redskins are the only professional football team with their own marching band?  I didn’t.  They stuck around the whole time.

Initially I was worried I wouldn’t be able to wear team colors.  As luck would have it, my nails were already painted gold from the week before and I remembered I owned red/purple colored jeans!  Sean wore a red stripped shirt too!  Without me asking him!  I just think it’s more fun to go festive.

It turns out after every Redskins touchdown, they sing their fight song, “Hail to the Redskins!” (aka HTTR!).

There’s a bit of a controversy over the Redskins name, and this song really doesn’t help.  (On that note, this is my favorite solution to their name dilemma.)

Unexpectedly, the Redskins won!  Papa Johns offered all fans a large cheese pizza with 12 free toppings (one topping for each Redskins touchdown which were doubled because they won) the Monday night following the game.  Our preferred pizza is Dominos, but Sean was all about those 12 free toppings!  He was disappointed to find last night that the website only offered 10 toppings and not the full 12.  And when he called to inquire about all 12 they told him he could only get the 10.  Then they told him they wouldn’t put the toppings he wanted on the pizza because it won’t bake correctly.  When it comes to Papa John’s he’s really only a fan of cheese and pepperoni.  He politely hung up and went to the website to double up as much as cheese and pepperoni possible.  He threw in some olives for good measure and because there was no other way to get to 10 with just cheese and pepperoni.

It was a tasty pizza but it was not as loaded up on toppings as we had ordered.  But it was fun and really funny for me to watch Sean try to get as many toppings as possible.  I like him.  He makes me laugh.  So thanks for two days of entertainment, Redskins!  Hail!