My mom’s dad’s girlfriend is friends with a couple whose son owns a few restaurants in Eugene.  Quite the connection, but it’s appropriate as this is quite the story.  The Friday after Thanksgiving we visited Falling Sky, his brewpub known for burgers and beer.  It was a neat spot.  The kind where you order at the front counter then find a seat with your food.  We scanned the board and then a kind waitress handed us some menus.  I gave one to Sean, who pulled a hand out of his coat pocket covered in blood. 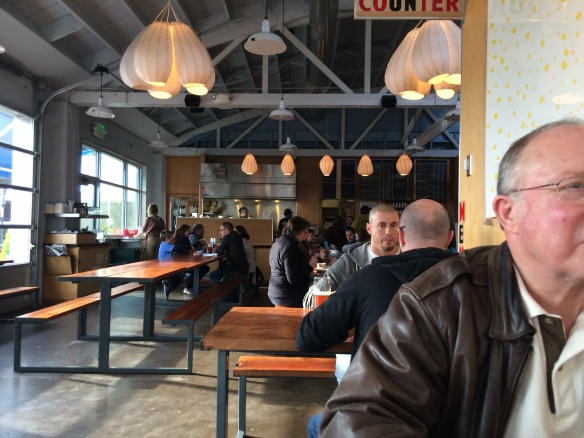 On Thanksgiving night Sean was sharing a story about office politics or something else that creates passion and his grip tightened around his wine glass at just the wrong angle and it broke.  He cut his right index finger right where the hand and the finger meet.  Right where it’s almost impossible to keep a cut shut because that area flexes all the time.  We’d attempted an urgent care visit but couldn’t really find one open.  He woke up Friday morning and the blood had dried and all seemed right with world, or at least his hand, so we carried on.  Until he decided to be gentlemanly and keep the door open for a woman at Falling Sky, reopening his wound.

I wasn’t expecting it, all that blood right there in the middle of Falling Sky with droplets ending up on the menu and a nearby table.  Sean went to wait for a bathroom, and I went to get him some napkins.  I was upset and surprised this was happening.  I was overly apologetic as I told the kind waitress that we’d dripped blood in her restaurant.  I rejoined my parents to look at the menu, although I couldn’t really focus.  I was really hungry.  Really hungry.  I knew I needed to eat something, but I just couldn’t focus.  I started to get warm, so I took off my coat and sat down on a high stool next to my mom.  I remember saying out loud that I needed to eat something, and I may have said it twice.  Something was happening to me.  I didn’t know what, but I was going to talk myself out of it.  “Sarah, you don’t have to do this.”  I thought, although I didn’t know what “this” was.  I was fighting really hard to hang on.

My dad came and stood next to me.  Somehow my head was on the table.  Someone said something about an ambulance.  That was not something I wanted to happen but I didn’t know how to lift my head or voice my opposition.  Then I was being hugged by my mother and she was saying the Hail Mary.  “That’s nice,” I thought but then, “why is she praying over me?  How did I get on the floor?”  Things started to get better and the room became more clear.  Sean appeared on the phone with 911 and I was finally able to use my voice to tell him that I did not want an ambulance.  None of that.  I was fine.  Someone may have asked me if I was okay and I remember saying I needed something to eat.  I was really hungry.  A damp cloth was produced while we waited and for a little bit of time I was worried about what would happen if I stood up on my own.  It took awhile but I eventually got there, ate some pretzels, and went to urgent care all to find out that I had just fainted.  It was a weird sensation for me, but for Sean and my parents my pupils had dilated and I stopped responding.  They thought I’d had a stroke.  Have you ever fainted?  It’s a pretty odd experience. 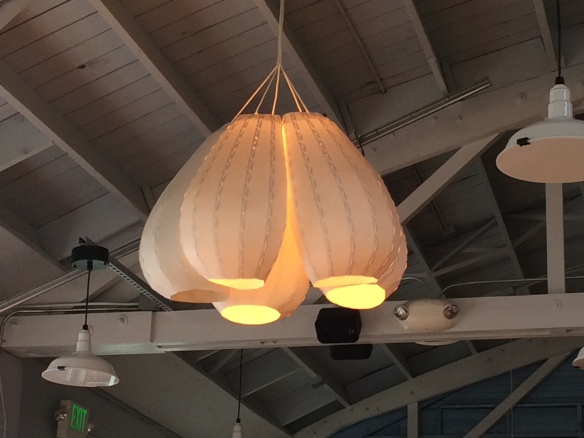 I really wanted to wait with Sean in urgent care while his finger was stitched up.  He would have never left me in urgent care.  But I was still so hungry, and I think we were all a little nervous that if I wanted too long I might faint again.  He told me he really wanted me to get something to eat, so my parents and I headed back to Falling Sky for some food. 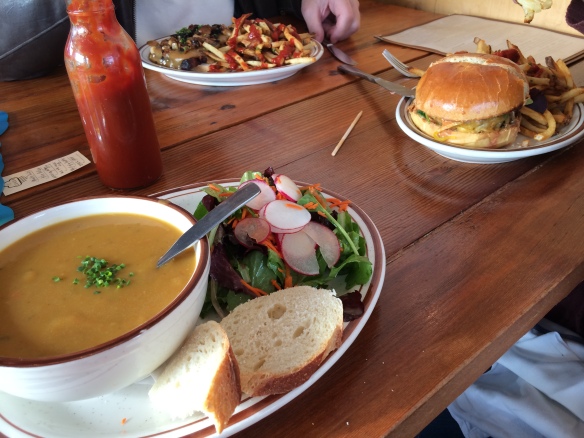 I had really wanted a burger but soup was about all I could take.  I did manage to get down a few sips of beer, although not much.  You have a tender stomach after you faint.  Oregonians really love their hops.  We don’t and they did a good job of picking out great tasting brews low on those IBUs. 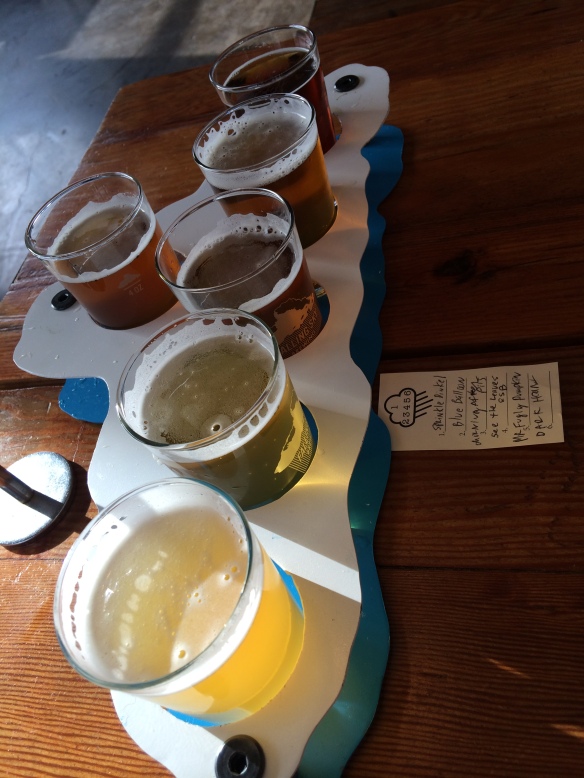 So in the end we were all fine, shaken but fine.  I hope I never faint again because it was just so odd.  We waited around my parents house a little longer than anticipated before heading out and seeing the rest of the Willamette Valley.  Probably for the best with an injured hand and a tender stomach.  Here’s hoping we don’t end our Christmas with quite the same kind of bang!