Last night I was beside myself.  I needed something sweet and it had to involve marshmallow.  “I feel like an addict,” I told Sean.  “I don’t know what to do but I just really need some Fluff…and some chocolate.  Like a s’more.”  I had just come from the kitchen where I had been pacing and wondering how I was going to get myself out of this because we did not have anything s’more like in our house.  “Could this be a craving, Favorite?” he asked with a smile.  “Oh my gosh, I think it might be.”  I thought about it.  “But I’m going to be fine.”  Trying to convince myself more than anyone else.  Because I really needed some marshmallow.

A short while later Sean goes to the bathroom and asks me to look for an episode of Modern Family we haven’t seen yet.  We love Modern Family but hadn’t seen an episode in awhile, so I was happy with the idea.  I look up from the TV and see flip flopped feet running down the stairs.  Seriously, the speed with which Sean came down those stairs towards the front door!  He was too quick for me.  After a minute or two of trying to process what was happening, I had enough time to stand up and tell him that he didn’t need to go to the store but not enough time to actually grab an arm or do something else to stop him.  He was out the door and laughing, gleefully, that he had made it and was on his way.

Sean came back with all the ingredients to make s’mores, including Fluff and marshmallows, and was so happy about it.

When he went to reach for the Fluff at the store a couple younger than us was watching.  The woman whispered “disgusting” and “so low brow” was the response back from her boyfriend.  Sean turns to them and he says “just wait until you get her pregnant and she has a craving!”  They were either not in a relationship or very new because Sean’s comment made them both visibly uneasy.  But, really, if you’re going to judge someone’s food purchases at least wait until they are out of ear shot.  Low brow or not, I totally ate a spoonful of that Fluff on it’s own.  Sean gave me a look of “really?”  but it was perfect and wonderful.

Then Sean made s’mores. 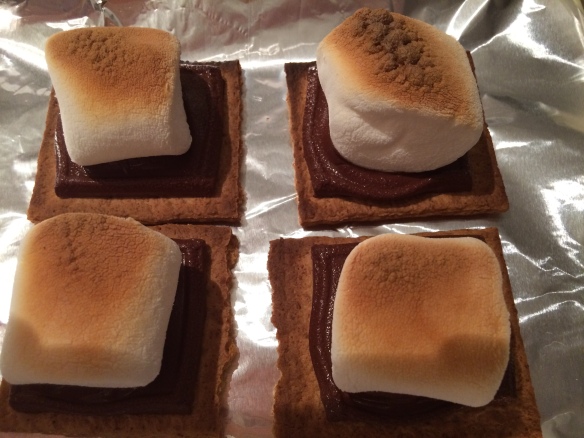 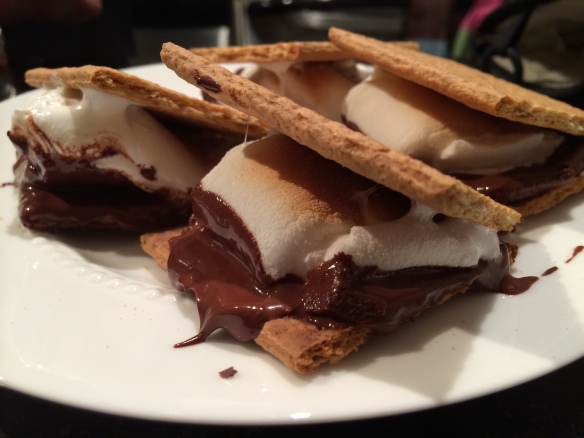 They were even more perfect and wonderful and I crushed my share resulting in chocolate all over my face.  Which Sean helped me clean up.  Almost a year ago Sean sent me a funny and sweet article about the author’s many quests to find the right foods to satisfy his pregnant wife’s cravings and his happiness to play this role.  Sean didn’t remember this article, but last night we was exactly like this guy.  More than happy to hunt down the perfect food combination for Baby A and me.  It was incredibly sweet, and I am very lucky.

1 thought on ““I just really need some Fluff…and some chocolate.””