Hope you had a wonderful Christmas!  Us three were in Utica, NY this year celebrating with my mom’s family.  We call it a cozy Christmas when we head up there.  I’m not sure if that’s because we fit almost everyone into Uncle Mark and Aunt Joanne’s house (one person usually ends up in a closet, the coziest bed of them all…really, it’s actually a great set up in the closet) or if it’s just because we like the alliteration (their last name starts with a C so when we add that in it has an even nicer ring to it), but it almost doesn’t matter because it’s cozy and it’s Christmas and it’s great. 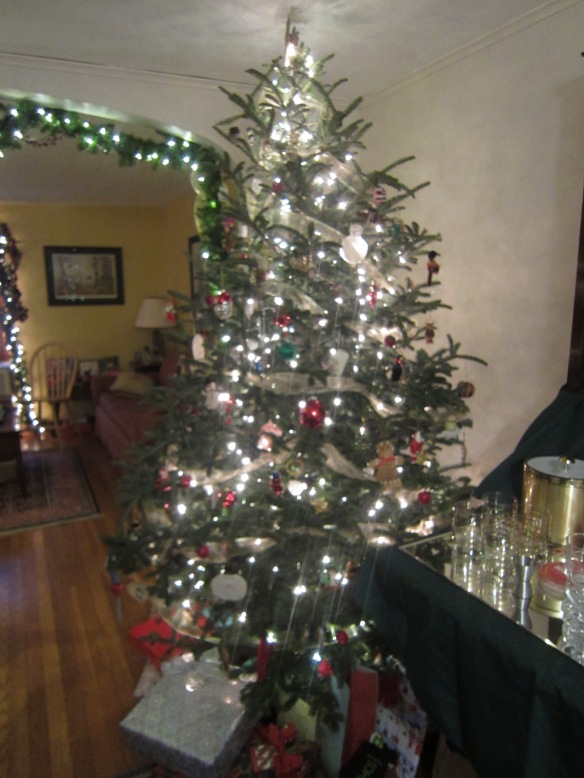 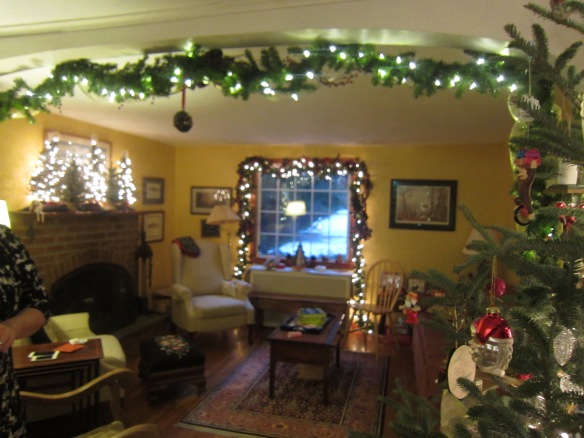 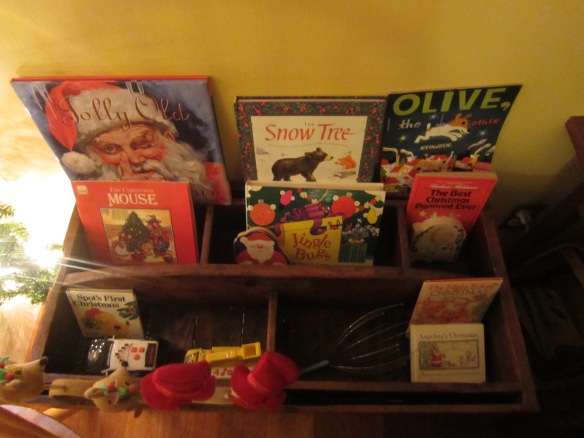 My camera was on it’s last legs, so please excuse the weird focuses and blurry lights.  But you can still see the most important part and that’s Aunt Joanne’s cozy set up with all the toys, books, and decorations.

Christmas Eve is hosted by Aunt Annie and Uncle Mark (a different Uncle Mark) who live just two doors down the hill from Uncle Mark and Aunt Joanne. 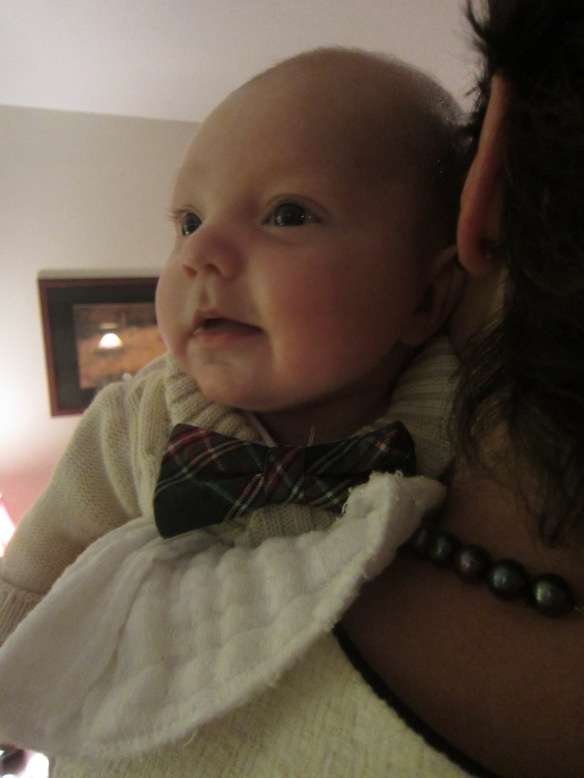 It was nice to have other people hold Wes while we nibbled and sipped. 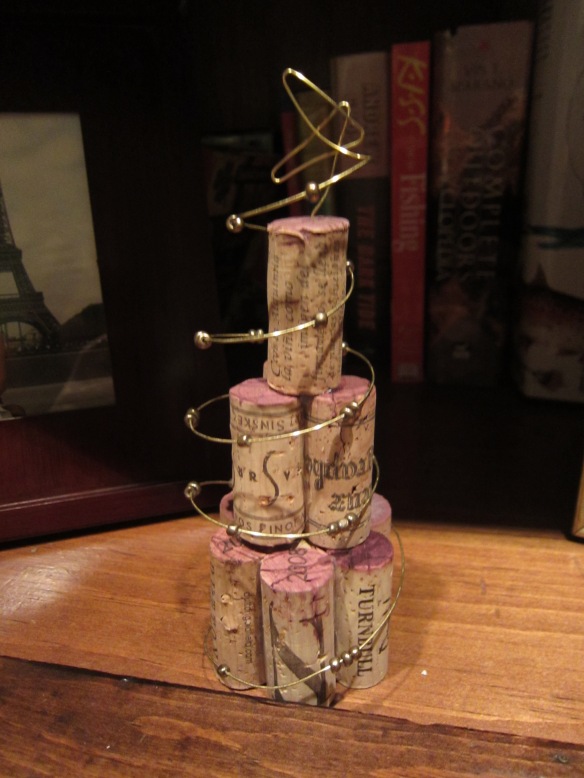 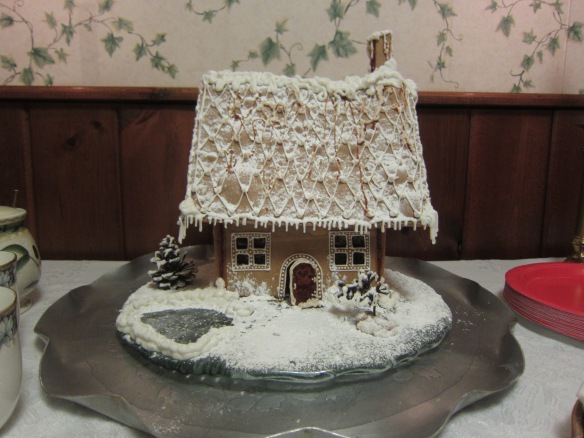 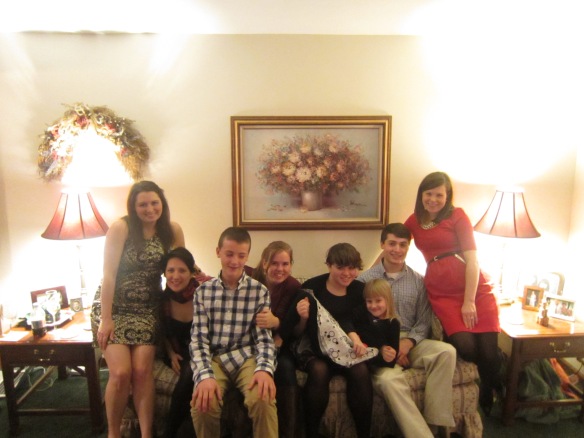 Our traditional cousins picture.  Sadly Wes had gone to bed shortly before this picture was taken.

On Christmas Day Uncle Mark’s dogs wanted to get in on Wes’s nine week picture.

Traveling with a baby is no joke!  Not only was there the part where we drove seven hours, but the part where we packed what felt like half of Wes’s room (and in all seriousness, we needed most of it), and then the part about sleeping arrangements.  Uncle Mark and Aunt Joanne had the best space for us.  We had a comfortable bed and there was plenty of space for all of Wes’s things and Pack n Play.  We couldn’t ask for a better set up, it’s just that we don’t sleep with Wes.  He has always been in his room in his crib and we have always been in our room in our bed.  That kid is loud!  We did not sleep at all that first night.  Thank goodness for ear plugs because I’m not sure what we would have done the other two nights without them.  Thank goodness for Aunt Ginger who found them for us.

While there were hard moments of travel, it was totally worth it.  We’ll fly next time, but it was all still worth it to see everyone for Christmas. 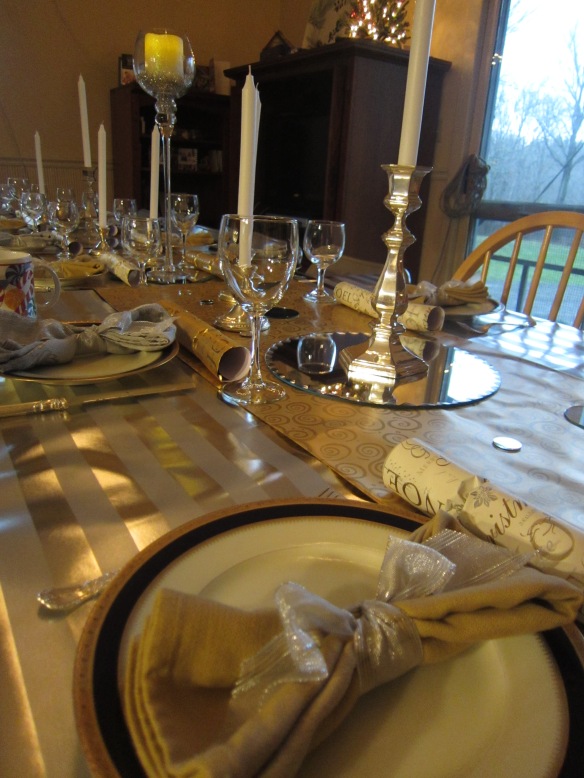 Wes wanted to be part of the party and since he couldn’t eat anything, we tried on all of our party popper gear.

Aunt Joanne made him all kinds of promises about future forts and singalongs and bonfires. 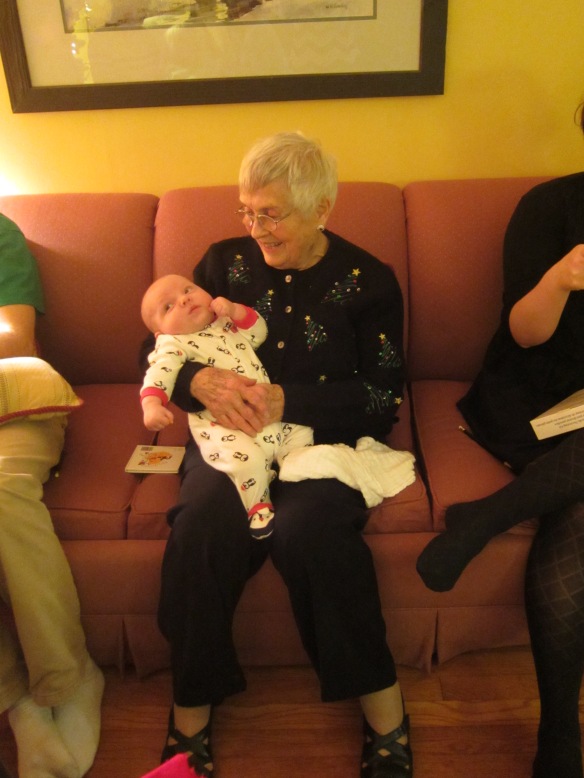 Thanks for having us, Uncle Mark and Aunt Joanne!  I can’t wait until the next cozy Christmas.