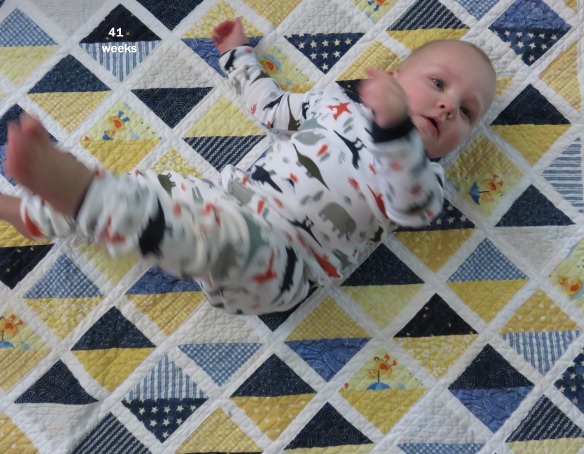 This has been an exciting week.  Wes is jibber jabbering on more, but still plenty of “ma ma” or “da da” over and over and over again. It’s fun!  Sean and Wes do this thing together where Sean will say “ma” or “da” or “boom” (Wes’s favorites), and Wes will repeat the same sound back to Sean (mostly, he is 9 months so it’s not perfect every time).  It’s very cute.

A friend from playgroup let me borrow a book she’d purchased from another mom, Slow and Steady Get Me Ready.  The book gives you an idea for a new activity to do with your child each week through age 5.  I love this book because sometimes I really struggle with how to play with Wes.  This week we worked on rolling a ball.  At the beginning of the week he had no interest.  Now, he loves rolling the ball!  It was so rewarding, especially after feeling like I don’t know how to play with him.  It also makes me look forward to each week’s activity.  Wes ate this week’s toy I made him, so we’re going to spend two weeks on putting objects into a container.  It’s a good thing too because I can tell this one will take awhile.

Oh, and he’s wearing pajamas in this picture.  We thought we might experiment with taking him out of the sleep sack for bedtime and put him into pajamas.  So far we’ve only played in the pajamas!  I’m so nervous to shake up a bedtime routine that has worked for 7 months!